Aaron O'Neal hosted Elvis: One Yeear at a Time - His Music and His Life Saturday's at Noon on Oldies FM 103.3 and AM1170. He also was the host of the “Hour With Elvis”, "Buddy Holly 50/50", "Ricky Nelson Teen Idol to Music Legend" and Elvis A-Z radio shows heard over AM 1170 WFDL and FM 103.3 and was on WXOL-AM during the early ‘90s and also hosted radio tribute shows for Elvis, Ricky Nelsen, Buddy Holly, Richie Valens and the Big Bopper. For ten years, Mike Utech was the manager of the Outta Style Show Band whose former members now appear as the Del Ray's. He also managed other bands including Bobby Rivers Live and several major musical events.

As the event manager of Kaukauna’s River Jam Mike produced one of the most successful River Jam events earning over $30,000 in profits for the River Jam sponsor, the City of Kaukauna. Mike also produced a “British Invasion” show and “Four Decades of Rock” that features four different bands each playing the music from a different decade. Mike has also brought shows from Branson, MO into the Fox Valley. Mike appeared in the movie “The MARKSMAN” starring Steve Kanaly (DALLAS), Martin Kove (The K ARATE KID), and Martha Byrne (AS THE WORLD TURNS) as an extra. The movie was filmed in Wausau, WI.

attendees.  Next was a Johnny Cash Birthday Party attended by another 500

people.  The birthday parties were followed by a Conway Twitty Tribute show,

a  Sock Hop, and another Elvis event held in August all featured performances’

A British Invasion Party, An Evening with Johnny Cash and Friends plus a Family Variety Show. In 2014, four shows were held.  In his third year he produced 10 shows for Waupun Festivals, Inc. including directing, It's A Wonderful Life-A Live Radio Play featuring the Waupun Community Players.  Other shows done in 2014 included a Cajun Dance Party, Chicago bluesman Billy Branch, a CCR Tribute band, the Avalons and Riders In the Sky from Nashville. They continued to produce shows in 2015 and 2016.

In 2018, Mike Utech began hosting a series of dances at the Appleton American Legion. The third Thursday of each month (except June, July and August) members of the WI Polka Hall of Fame and other area musicians jam together for a polka dance at Club 38 (inside the Appleton Legion building), Also Mike Utech produced a sold-out multi-ETAs show at Club 38 March 30, 2019 called Elvis Gold. .Mike continues to plan and host other shows at Club 38 inside the Appleton American Legion building

With a background in marketing, promotion and fundraising, Mike Utech has assisted schools, churches and organizations in producing successful musical fund raising events for over 30 years.

Aaron O’Neal is the alter ego and radio name of Mike Utech, manager and event coordinator.  Aaron O’Neal  produced the Waupun Festival, Inc. Series 2015 that was held at the Historic City Hall Auditorium in Waupun, Wisconsin.  In 2016, two show were scheduled in Waupun "Search for The King, Elvis Tribute Artist competition May 7th and a Salute to Sun Studio and the Million-Dollar Quartet November 11th.  12 Elvi of Christmas was held in Green Bay at Stadium View on Holmgren Way, December 17, 2016 and 12 Elvi of Christmas 2 will be held December 16, 2017. 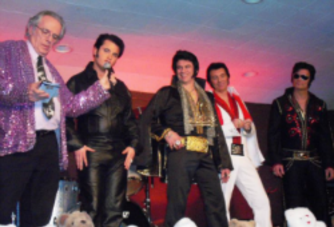 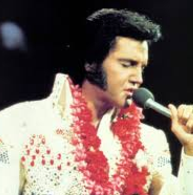